Download Mini Militia Death Sprayer Mod Apk in 2018 with Rockets, Saw Cutters, Machete! Find everything that you were craving for, with the Death Spryer Mod.  Fire them all at over 100 rounds per second, Health generates faster, speed mod activated, bullet power increased, infinite bullets per shot, death spray mod and more.

The Doodle Army 2: Mini Militia Death Sprayer Mod 2018 has come a long way since its release on the web. This is the only Mini Militia mod that allows you to launch countless rockets in a split second.

The Rocket Launcher for this mini militia unlimited death sprayer mod has been turned into a fully automatic weapon. And The Secondary GUN is Saw Cutter. Fire them all at over 100 rounds per second. ???? 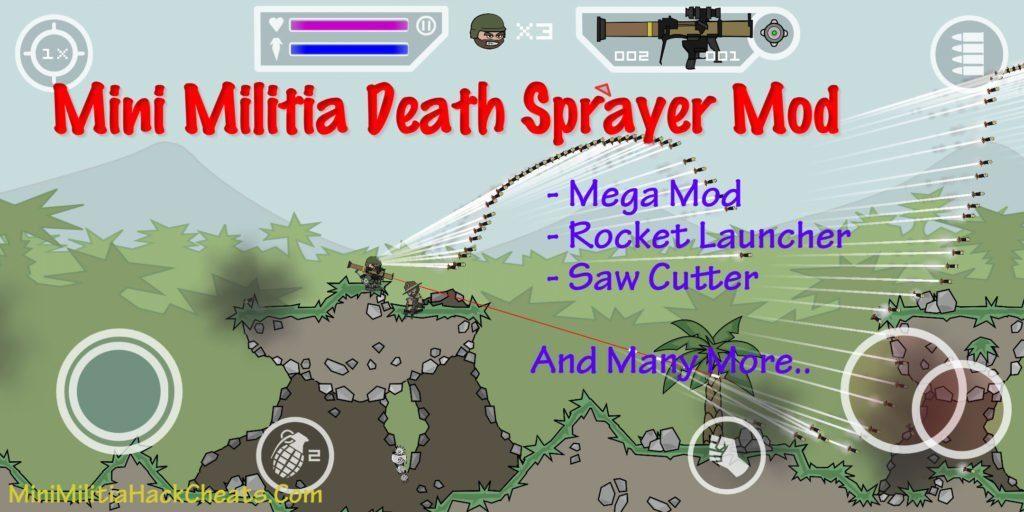 We suggest all of you go by the undermentioned procedure to install this Death Sprayer hack correctly. If even after closely following the instructions you get errors, we suggest you read the full post on issues related to Doodle Army 2.

The Doodle Army 2 Death Sprayer Mod apk given here has been tested on Android Marshmallow (6.0.1), Nought (7.0) and no problems have been reported. The download link given here does not have Machete default but would be included in the next update with Speed Hack. Uncommon offsets were encountered when the main weapon, the rocket launcher, was tipped to Saw Cutter.

Note: You don’t need to uninstall others Mini Militia, You can keep it with any other original/mod MM version.

We suggest you use Chrome web browser for downloading the apk. The latest version of Chrome can resume interrupted downloads without corrupting the apk file.

But what about the guns not firing issue?

The application has been updated to solve the problem encountered in some devices where the weapons did not shoot. This hack was created keeping in mind that each weapon has unlimited ammo.

The Death Sprayer game is a hacked mod version of the original game and will, therefore, be detected by Mini Militia servers. The hacking detection algorithm used in the servers will place you on a dedicated server (QP.Mod) intended only for Moded Mini Militia games. We could have made the application to work around this server and be included in the list of regular servers (QP), but did not. This would allow standard and Moded gaming players to enjoy the game without worrying about hackers.

All Credit goes to Naveen RG for this MOD.

ModApkMod.com has published this death spray mod just to let players enjoy something different from the usual but do not encourage them to continue using this game for online or offline play.