How to Play Arena on Castle Clash [STRATEGY GUIDES]

Arena on Castle Clash (Rise of Beasts): The arena is a place only for heroes to fight. The game is a bit different from the general raid. There will be no other troops or spells involved just heroes. Instead of destroying an entire city, the goal is to destroy your opponent’s sanctuary before they destroy yours. The arena contains 3 horizontal paths to reach the enemy base. The game is played by each player with up to 5 heroes (as usual you can not use two or more of the same hero) on any combination of paths. Each path is more or less the same distance, but most people prefer to take the middle way.

At the beginning of the battle, each player hero will automatically start moving to the other side of the arena to destroy the enemy shrine. If the heroes collide in the middle of the path, they will fight each other, and the surviving heroes will continue to run to the sanctuary to destroy it. The first player to destroy the enemy’s sanctuary will get the victory. Each player will have a ranking, the better you get, the higher you rank.

There is a mode of attack and a mode of defense. The defense mode works by having you configured your heroes in the specified channels. After that, you have nothing more to do from you. Players around your rankings can challenge you and the heroes you created previously will fight automatically. You will not be able to see this fight, but there is an activity feed informing you if you have won or lost your last 3 games. You can always rearrange your heroes whenever you want. If players attack you and get victory your ranking will fall, if they fail, your rank remains unchanged.

In attack mode, you can watch your battle. You are given 20 seconds to place your heroes on one of the designated routes and when the battle begins, it will depend on your heroes’ ability to destroy the sanctuary. And you can no longer control them. If you win, you change rankings with your opponent. If you lose, your rank remains unchanged. You can have up to 5 battle chances and they rebuild every 30 minutes.

How to play Arena (on Castle Clash: STRATEGY GUIDES)?

For starters, the first thing you need is to create the actual arena building. Go to the store -> attack -> arena and place the arena anywhere you would like. Tap on the arena should have 3 options, info, defense, and enter. Although the arena says Level-1, it can not be upgraded, for now at least. You must first configure your defense by pressing the Defense button. You should see the screen similar to the one below.

Press change configuration and now you can place your heroes on one of the auras by pressing the portrait of the hero you want at the bottom of the screen and tapping on the top, middle or bottom aura. Each aura will have current heroes of those respective positions when the match begins. You can choose any combination you like. When you are satisfied with your choices. You can press OK and then pressing the red X in the upper right corner. Now, whenever you are attacked your heroes will follow your saved configuration. It may be amended at any time thereafter.

When you attack the general idea is the same except that you have to manually make your configuration every game. To start an attack, select your arena building and press the Enter button. You must enter the hall of the arena.

You are shown 5 players you have the right to challenge. To beat one of them press their portrait and press the challenge button. You should reach a screen where you can place your heroes. You have 20 seconds to choose where you want them to start.

If you chose the wrong hero, be sure to press the Edit Setup button as this will reset all of them instead of just letting you change the one you do not want. If you only have a few seconds left and press to change the configuration, you may not have enough time to deploy all your heroes again and you will be at a great disadvantage. Once you are finished choosing your heroes, you can press start and you can watch the battle. Good luck and may always destroy your enemy sanctuary first!

The arena can be a bit intimidating at first, but after playing it is fun and very competitive. More importantly, you get awards in the form of badges of honor. There is no better place than the arena to receive HB because by building an arena you will automatically receive a certain amount of HB per hour depending on your ranking. In addition, you receive HB to win and lose. You will get 40 for each win and still manage to get 6 to fail. Another thing to keep in mind is that you can get achievements that give gems to win and lose arena battles from where you should play as much as you can retain the benefits. 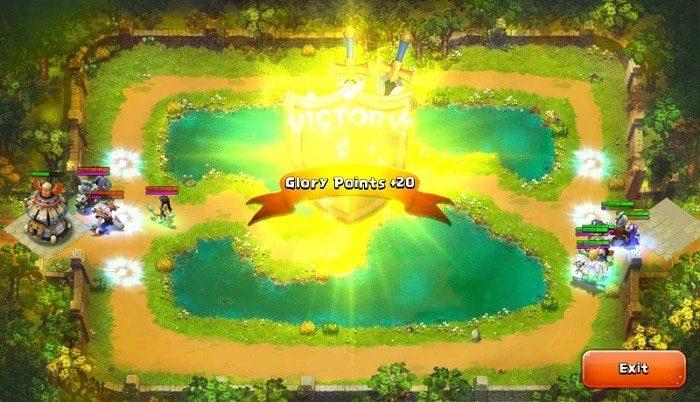 The arena is also a great place to spend your time when you are only waiting for your troops to build, or your heroes to relive. Even if your heroes are not made to raise, you can still use them in the arena. Attack in the arena also does not break your shield so that your free to battle when you want by assuming you have chances of battle.